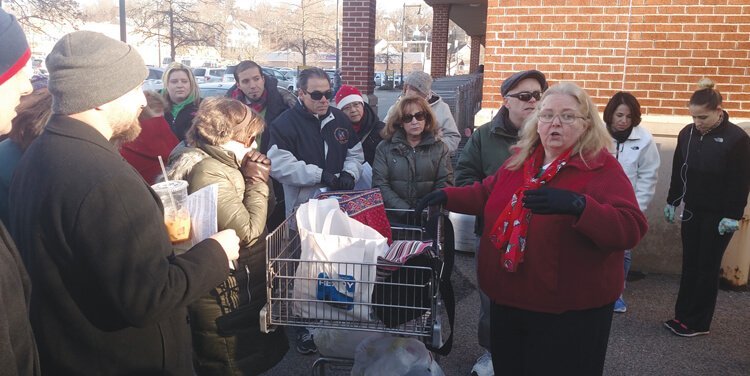 About 60 or so Parkway residents came out on Tuesday morning to give back to those in need. The program delivered groceries to and turkeys to more than 130 families and seniors this year, which is the highest number yet.
Once again this year, about 60 Parkway residents, police officers, food pantry organizers and Roche Bros. employees came together on a cold December morning to distribute much-needed food to those in need.

Family in Need, started by Mary Mulvey Jacobson, is a program designed to bring food, groceries and other needed sundries to families and seniors across the Parkway. Every year for more than a decade, residents have come together to help out and show their holiday spirit. The event is hosted by the West Roxbury Business and Professional Society and sponsored Roche Bros., Rose’s Bounty Food Pantry, East Boston Savings Bank, Agewell Ethos and many others.

“It’s an unbelievable number of people that we have to take care today,” she said. ““If you haven’t made a donation to help us pay for the groceries and the other things for the families in need, please consider doing it… We’re collecting straight through to the beginning of the year.”

Jacobson said those still wishing to donate can do so by mailing checks payable to FAMILY IN NEED and mailed to the West Roxbury Business and Professional Association. Post Office Box 320113, West Roxbury, MA  02132.  Donations can also be dropped off at the Parkway Community YMCA, or Reliable Trading Post, 115 Park Street, both in West Roxbury.

Jacobson said this year’s need was the most she’s ever seen, which is good that the program exists, but not a great sign in the community itself. 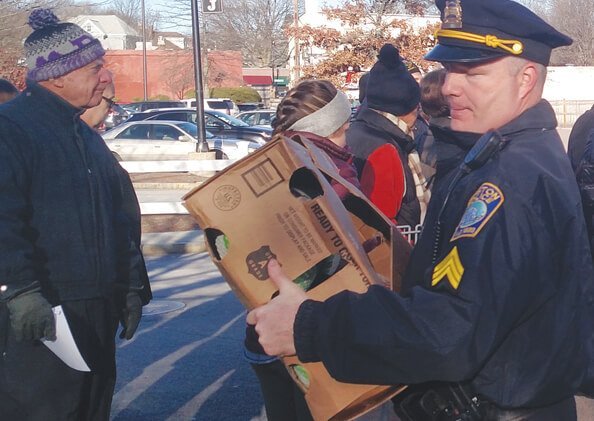 District E-5 Boston Police Sgt. Scott O’Mara and his team grab groceries
off the truck for distribution to the drivers.

“It is good, but we have going on 130 deliveries today, so it’s the most we’ve ever had and all these people are vetted, so this is true need you know?” she said. “It’s kind of scary.”

The program takes bags of groceries from Roche Bros., paid for by donations with a discount from the supermarket, and brings them to residents through volunteers.
“We do have a lot today, so you’re probably going to get more grocery deliveries than in the past,” Jacobson said.

Jacobson said this year was especially trying, as they have three families in the Family in Need special program, for which the group asks for and provides just about anything that a particular chosen family is in dire need of.

“We actually have three families in need, as opposed to two, we just couldn’t turn down the third family,” Jacobson said.

Residents Rosemary Purteel and Aisling Walsh showed up early for the event. Purteel said she’s been doing it for almost a decade, but has rarely been able to attend the Christmas delivery.

“I’ve always done it on Thanksgiving because I’m usually working on the day they do it for Christmas,” she said. “It seems to me that every year, year after year, there are more people volunteering to do it.”

Purteel said that it’s always a well-attended event, which was great for this year as there were so many in need.

“I don’t think it was last year, but the year before I only had two deliveries because there were so many people,” she said.

Walsh said this was her first year volunteering, and Purteel said she’s glad they came together. She said the community always comes through when needed.

“I’ve been doing it probably eight or nine years,” she said. “I think it’s wonderful, I think Roche Brothers is such support to the community in general but for this particularly drive they really step up.”

Resident Ginny Gass said the event itself was a small miracle, especially to those in need.

“How lucky we are to be a part of WRBPA’s community outreach program which delivered Christmas groceries to many, many folks today,” she said.

Roche Bros. Employees Mike Pedranti and Bob Randall said they are amazed at the outpouring of community support.

“I’ve been here since January so this is my first time handing out the kits and everything for Christmas,” he said. “November was great, (Store Manager) Sean Connor was there and it went out without a hitch.”

Randall said he’s been doing it just a bit longer.

“I’ve been in this store for four years and this is my second time doing this,” he said. “I think it’s great, what the community does for the people in the community is really, really good.”

The first family selected is two parents and two children. According to Jacobson, the children, Jane aged 2 and and Deirdre aged 4, said hats and are a necessity, especially this winter. Jane is a size 24-months and size 7 shoes, while Dierdre is a size 6 in clothing and a shoe size of 11. Jacobson said Deirdre would love to have winter tights, warm winter clothing, boots and shoes. She said she is “crazy about music and is delighted with anything disney.” Jacobson said Jane also loves music, and age-appropriate instruments would be a help to her.

The next family, a single mother with a three-year-old named Mary, who came with her mother from Haiti in the past few years. Jacobon said the mother currently has a full-time fast foo job, taking any overtime she can, but is still having a hard time getting the necessities Mary needs and shares an apartment with a roommate. Mary, according to Jacobson, loves dolls, dressing up, big cars and play kitchens.

NEXT Meet Our Staff at Purtell Law